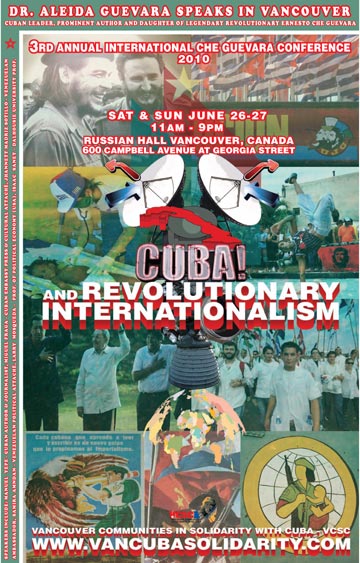 On June 26th and 27th, 2010, the Third Annual International Che Guevara Conference was held in Vancouver, Canada. This year’s conference, an annual event organized by Vancouver Communities in Solidarity with Cuba (VCSC), was on the theme of “Cuba and Revolutionary Internationalism”. With speakers from across the US, Canada, Cuba and Venezuela, this conference aimed to discuss a vitally important component of any revolutionary movement, which is at the core of the Cuban revolution: working-class internationalism. More than 400 people attended this important conference.

Saturday, June 26th began with a press conference at the Russian Hall in Vancouver, which was well-attended by local media. The press conference also marked the unveiling of a graffiti mural outside the Russian Hall for the Cuban Five political prisoners held in US jails, the first public mural of its kind in North America. The mural is the work of local artist Josue Gonzalez.

The conference was then officially opened by Colleen Glynn, the secretary of Vancouver Communities in Solidarity with Cuba (VCSC). By the time the conference began, already more than 200 people filled the hall to see the film “Aleida Guevara Remembers Her Father, Che” and to hear Dr. Aleida Guevara share further recollections of her father, the legendary revolutionary Che Guevara. Dr. Guevara is a lifelong Cuban revolutionary leader, a pediatrician and the author of the book “Chavez, Venezuela and the New Latin America”.

The first workshop was “Cuba Today: How Far the Revolution has Come”, featuring a dynamic and interesting presentation by speaker Miguel Fraga, Press and Cultural Attaché at the Cuban Embassy in Ottawa. His excellent presentation highlighted Cuba’s achievements in health, education, culture, sports and other areas since the 1959 revolution.

The second workshop concentrated on “Cuba’s Internationalism and its Influence on the Bolivarian Revolutionary Process” and was led by Samira Amndan, Diplomatic Attaché at the Venezuelan Consulate in Toronto. Samira spoke about the important role that Cuba has played in supporting the current revolutionary process in Venezuela.

Larry Mosqueda, a professor of political economy at the Evergreen State University in Olympia, Washington delivered the third workshop, “The Origin of Revolutionary Internationalism: Through the Eyes of Marx and Engels”. Larry gave an interesting and well-received presentation on the roots of and necessity for working-class internationalism.

The first day of the conference finished off with special reflections and stories about working with Che Guevara from Manuel Yepe, a journalist and professor at the Superior Institute of International Relations in Havana, Cuba. Manuel was a leader in the underground July 26th Movement leading up to the triumph of the Cuban Revolution and worked directly with Ernesto Che Guevara.

Following the workshops and discussion section of the day, the conference was transformed into a special evening for the Five Cuban Heroes held in US prisons. More than 120 people attended this special evening event, which featured poetry by Alejandro Mujica-Olea and Shakeel Lochan, music by the Latin band “Maria y los Dos Rafaels” and local hip-hop crew “Republica Central”, as well as speeches by Manolo de los Santos, a project coordinator for IFCO/Pastors for Peace in New York, Walter Lippmann, the editor in chief of CubaNews and a long-time social justice activist, and Dr. Aleida Guevara. The first day of the conference ended with new energy and drive to continue the struggle for the liberation of our five Cuban brothers held in US prisons.


The second day of the conference began with a special presentation by Arnold August, author of the book “Democracy in Cuba and the 1997-98 Elections” and the forthcoming book “Cuba: Participatory Democracy and Elections in the 21st Century”. Arnold gave a presentation on “The Importance of May Day in Mass Mobilization for Advancing Social Consciousness in Cuba”, based on his different experiences of May Day in Cuba in 2001, 2009 and 2010. Arnold noted that May Day in Cuba is not just a day where millions of Cubans come to the streets to commemorate International Workers’ Day, but each year has a unique reflection of the social and political situation in the world and in Cuba.

The first workshop of the day was on “The Concept of Internationalism in Cuba’s Foreign Policy”, a presentation delivered by Manuel Yepe. Manuel gave an extensive history of the internationalist base of Cuba’s foreign policy since the beginning of the Cuban revolution.

Following a brief lunch break, conference attendees came back to hear a presentation on “Cuban Youth and Revolutionary Internationalism” by Manolo de los Santos, Alison Bodine and Tamara Hansen. Manolo and Alison are both project coordinators for IFCO/Pastors for Peace and Tamara is the coordinator of Vancouver Communities in Solidarity with Cuba and the co-chair of the Canadian Network on Cuba. All three focused on the internationalist education that Cuban youth are brought up with, learning not just about Cuba’s history but the history of struggles of people all around the world as well.

The next workshop of the day was “Looking at the Past: the Third International and Looking at the Future: the Creation of the Fifth International”, given by Ali Yerevani, the political editor of the Fire This Time Newspaper and a long-time social justice activist. Ali discussed the need for working people and all progressive forces around the world to unite in a common struggle for social justice, and in particular, the need for a revolutionary leadership in this struggle. He spoke about the important role of the Third International in doing this nearly 100 years ago, and about the importance of the call for a Fifth International by Hugo Chavez, President of Venezuela.

The next workshop, “The Concept of Internationalism in Cuba’s Foreign Policy: Internationalism in Theory and Practice”, was delivered by Isaac Saney, a professor at Dalhousie University in Halifax, Canada, the author of the book “Cuba: a Revolution in Motion” and a co-chair of the Canadian Network on Cuba. Isaac gave a comprehensive presentation focused on Cuba’s internationalist missions, from sending tens of thousands of doctors to countries around the world to sending 30,000 soldiers to Angola to fight in the war of liberation against the racist apartheid regime of South Africa which had invaded Angola.

Conference participants were all ears to hear the final presentation, “Che Guevara, Revolutionary Internationalist: Are His Ideas Relevant to the 21st Century?”. This workshop was delivered by featured conference speaker, Dr. Aleida Guevara. Dr. Guevara captivated the hall with her speech on Che’s ideas on internationalism and their importance in the world today. Her informative and vibrant presentation was met by a standing ovation by all in attendance.

Following a thank-you to Aleida Guevara and all of the conference speakers, a conference closing was delivered by Aaron Mercredi, an editorial board member of the Fire This Time Newspaper and an organizer with the Indigenous Rights and Action Project. Aaron emphasized the need to put all that was learned about revolutionary internationalism in the conference into action and get involved in the fight for social justice.

Today, an expanding new era of war and occupation, hunger, poverty and environmental devastation are more and more threatening the future of humanity. To ensure the survival of humanity, people around the world must unite in a global fight for social justice and the creation of a better world. Revolutionary internationalism is a necessary tool in this struggle, and the Third International Che Guevara Conference was a success in delving deeper into this concept both in theory and in practice as we see it in the Cuban revolution.

For further updates and information on activities of Vancouver Communities in Solidarity with Cuba and on next year’s Fourth International Che Guevara Conference, please check: www.vancubasolidarity.com