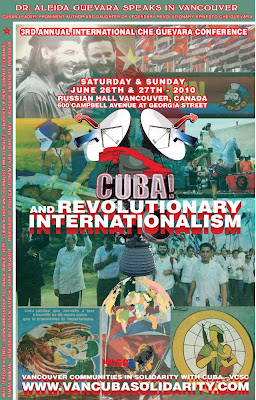 MANUEL YEPE - journalist and professor at the Superior Institute of International Relations of Havana. Manuel was a leader of the underground July 26 Movement in Matanzas leading up to the triumph of the Cuban revolution, and worked directly with Ernesto Che Guevara.

MIGUEL FRAGA - Press and Cultural Attaché at the Cuban Embassy in Canada.

SAMIRA AMNDAN - Political Attaché at the Venezuelan Consulate in Toronto.

ISAAC SANEY - Professor at Dalhousie University in Halifax and co-chair of the Canadian Network on Cuba. Author of the book, Cuba: a Revolution in Motion.

ARNOLD AUGUST – Author of the book, Democracy in Cuba and the 1997-98 Elections and the forthcoming book, Cuba: Participatory Democracy and Elections in the 21st Century.

TAMARA HANSEN - Coordinator of Vancouver Communities in Solidarity with Cuba (VCSC) and co-chair of the Canadian Network on Cuba.

ALI YEREVANI - Political editor of the Fire This Time Newspaper.

Since the triumph of Cuba’s 1959 revolution to today, the vision and political ideas that shape the Cuban revolution remain a source of inspiration, discussion and debate around the world. Through the ideas of Fidel, Che, the Cuban socialist project, and the dynamics of the mass revolutionary movement, Cuba has become a country renowned for its achievements in health, education, culture, science and many other aspects of social and human progress. The Cuban socialist project and the Cuban revolutionary leadership, despite 50 years of an inhuman and criminal blockade by various US administrations, have never wavered to imperialist pressure.

>>> Press Conference & Unveiling of New Graffiti Mural & Campaign for the Cuban 5
SATURDAY JUNE 26 ~ 11:00AM to 11:45AM
To start off the conference, Dr. Aleida Guevara will be unveiling a new mural in honour of the 5 Cuban Heroes held in US jails, which will be displayed outside the Russian Hall. The mural is a work by Josue Gonzalez, a talented, young graffiti artist. Alongside the mural a new post-card campaign for the Cuban 5 will be launched by the Free the Cuban 5 Committee-Vancouver.

SATURDAY JUNE 26 at 7:30PM
**SPECIAL EVENING: Saturday night of the conference will be a special evening dedicated to the 5 Cuban heroes held in US prisons with featured speakers, music, poetry and multimedia.

For updates and more information, see the conference blog at:
http://vancouverinternationalcheconference.blogspot.com/