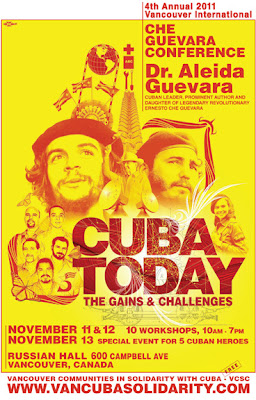 Cuba Today!
The Gains and Challenges

For the 4th consecutive year, the Vancouver International Che Guevara Conference took center stage to discuss the theme, “Cuba Today: The Gains and Challenges.” The conference was a great success, bringing together over 500 people to participate in 26 packed hours of workshops, discussions, films and cultural presentations hosted by 17 distinguished presenters from Cuba, Venezuela, and across North America. The conference is organized by Vancouver Communities in Solidarity Cuba (VCSC).

The conference opened with a welcoming by Coast Salish Elder Kelly White, who presented Aleida Guevara with a handmade star blanket, a symbol of protection and respect to welcome the Cuban revolutionary to her territory. VCSC Executive Committee member Colleen Glynn gave a conference opening and presented a special greeting from Cuban Ambassador to Canada, the Honourable Mrs. Teresita Vicenti Sotolongo.

Throughout the conference, the diversity of participants was apparent. Looking around the hall, you could see youths of 15 years to elders in their 80’s, representing a wide variety of nationalities and ethnicities, and members of many different communities. Participating in the conference were members of arts and cultural communities and the LGBTQ community, and a wide range of ethnic and religious communities, including the Muslim community, Indigenous, Latin American, African, Middle Eastern, and so on. This broad and inclusive environment brought everyone together under the banner of discussion and debate on “Cuba Today.”

Dr. Aleida Guevara, a Cuban revolutionary leader, prominent author, pediatrician, and daughter of legendary revolutionary Ernesto Che Guevara, joined the conference for the second consecutive year to present a much-anticipated workshop titled “World Crisis, Imperialist Offensive and Our Alternatives.” She emphasized that the fight Che Guevara led to confront imperialism in every corner of the world remains the central challenge in today’s fight for a better world. Dr. Guevara’s rousing talk was followed by the documentary film, “The Uncompromising Revolution” by renowned filmmaker Saul Landau.

Participants then had the privilege of taking part in two workshops by two lifelong Cuban revolutionaries. Mrs. Maria De La Luz B'hamel, the Minister Councilor of the Cuban Embassy in Ottawa presented on the topic of “Cuba’s Gains, Challenges and Evolving Socialism.” She was followed by Manuel Yepe, who worked directly with Che Guevara before and after the Cuban Revolution, and is currently a journalist and professor at the Superior Institute of International Relations of Havana. Professor Yepe presented the innovative workshop, “Cuban Reform VS. Chinese Reform: What We Can Learn.”

Throughout the day participants also had the chance to reflect on the different Cuban photo and art exhibits on display, and also read from the world’s perhaps largest ever printing of “Socialism and Man in Cuba”. This impressive 5 by 10 feet banner was visible from everywhere in the hall, and between workshops VCSC organizer Azza read aloud selected quotations from this, Che Guevara’s most fundamental writing.

Nelson P. Valdes, renowned Cuban-American intellectual and Emeritus Professor at the University of New Mexico, closed the first day with the workshop, “Cuban Foreign Policy Against U.S. Foreign Policy: Revolution and Counterrevolution in Our Backyard”. With over 50 years of experience on the subject, Professor Valdes really illustrated the vicious and continuous battle the U.S. has waged against Cuba and the “threat” of its good example.

To close the first day, Colleen Glynn returned to the stage with VCSC coordinator Tamara Hansen, who concluded by saying, “This conference is part of what Fidel calls the Battle of Ideas – where we have been able to discuss and debate not only the Cuban Revolution, but most importantly how learning from Cuba’s example is necessary in our struggle for a better world.”

The hall filled quickly on the 2nd day of the conference with participants from the previous day alongside new faces. To start out the day, the conference was greeted by the new Consul General of the Bolivarian Republic of Venezuela in Vancouver, Mrs. Merli Vanegas, who spoke of the Bolivarian and Cuban Revolutions as fundamentally linked in the past, present and future.

The workshop “Fidel, Cuba and the Imperialist Attack on Libya” discussed a critical issue in today’s world, and Cuba’s principled stand for the self-determination of oppressed nations. The workshop was presented by Tamara Hansen, VCSC coordinator and author of “5 Decades of the Cuban Revolution: The Challenges of an Unwavering Leadership”, alongside Aaron Mercredi, editorial board member of the Fire This Time Newspaper and organizer with the Indigenous Rights and Action Project (IRAP).

The advancements of women within the Cuban Revolution, which Fidel called the “revolution within a revolution”, were explored by Moon Vasquez, Cindy Domingo, and Michelle Clark, three Seattle organizers of the U.S. Women and Cuba Collaboration. They screened the documentary film “Maestra,” about the successful women-led campaign to eradicate illiteracy in Cuban directly after the Revolution.

Evergreen State College Professor Larry Mosqueda received a standing ovation for his thorough and thoughtful analysis of “Why Che’s Ideas are Fundamental for Our Struggle Today,” while Cuba’s achievements in the “agricultural revolution” were then highlighted by UBC Professor and Canada-Cuba Farmer to Farmer Project organizer Wendy Holm in her workshop, “Sustainability and Cooperatives in Cuba’s Future.”

Professor Nelson Valdes returned for the dynamic and interactive, “60 Minutes with Nelson Valdes: All the questions you were afraid to ask about Cuba,” in which everything from Cuban folklore to the rights of the LGTBQ community were up for discussion.

The conference would not have been complete without the return of Aleida Guevara for the final workshop, “Che and the Cuban Revolution”. Given the previous presentations and discussions on Che’s ideas, Aleida chose to focus on Che’s role as a revolutionary doctor, and to field a wide variety of questions about both her and her father’s revolutionary work and ideas. Aleida also shared both touching and humorous personal stories about her father’s life and work, as well as treated the audience to a her beautiful rendition of a Cuban song about Che Guevara. All of the presenters for the previous two days joined each other on stage to close the 2nd day of the conference and the hall was filled with chants of, “Viva Cuba!” “Viva Che!” “Venceremos - We will win!” as the presenters received a standing ovation. The hall was as full to close the workshop portion of the conference as it had been during the opening. Hundreds of diverse and engaged participants had listened to many presentations, shared and debated their own ideas, and become part of the proof found in the conference. The proof that Che’s ideas and the Cuban Revolution remain just as important today as they were 50 years ago.

The next day was a special cultural event in honour of the Cuban 5 heroes held in U.S. jails. An impressive and wide ranging group of artists shared their talents in the name of freedom and justice for these five Cuban men, who for 12 years have been unjustly held in U.S. jails for investigating and exposing U.S. backed terrorist groups which carry out attacks against Cuba.

The event began with the new documentary film “Will the Real Terrorist Please Stand Up?” by Saul Landau, which exposes the history of US backed terrorism against Cuba and makes a strong case for the freedom of the Cuban 5.

Artists such as Sangre Morena, Joaquin Ernesto and MX Catracho sang songs of love and revolution. Local poets Dilia Ochoa and Shakeel Lochan shared the stage and their hearts alongside Seattle based poet Hap Brocki, and Vancouver hip-hop artists and recent participants in the 2011 Cuban HipHop Symposium Joose Justis and Attikus brought new rhymes and energy into the fight for the freedom of the Cuban 5.

The event also featured an exhibition of artwork by Gerardo Hernandez, one of the Cuban 5, which showed both his sense of humour and determination in both the fight for the freedom of the Cuban 5, and also in defense of his beloved homeland.

Alicia Jrapko, Coordinator of the International Committee to Free the Cuba 5 gave greeting from San Fransisco, and lawyer and former Vancouver City Councillor Tim Louis was presented with a special award for his consistent campaigning for the freedom of the Cuban 5, by Marilu B’Hamel from the Cuban Embassy and VCSC Coordinator Tamara Hansen.

One of the most touching moments of the program was Aleida Guevara’s reading of a moving message and poem dedication to Che, which she received from Antonio Guerrero, one of the Cuban 5, written specially for the conference.

Ali Yerevani, political editor of both the Battle of Ideas Press and of the Fire This Time Newspaper gave the conference assessment and closing. After almost 26 hours of conference program, Ali emphasized that the fight to defend Cuba cannot be separated from the fight for a better world, and that this fight began long before 1959 and the triumph of the Cuban Revolution. He invited everyone to get involved in this struggle and consider an important quotation of Che’s when confronting the world’s challenges including the fight for the Cuban Five, “We are realists, we dream the impossible.”

The cultural event closed with the singing of a song dedicated to the Cuban 5 written and performed by members of VCSC and the Free the Cuban 5 Committee – Vancouver.

A cultural event dedicated to the Cuban 5 heroes was a fitting end to the 4th Annual Vancouver International Che Guevara Conference, as these five men are living proof that the Che’s example lives on, as does the fight for a better world. 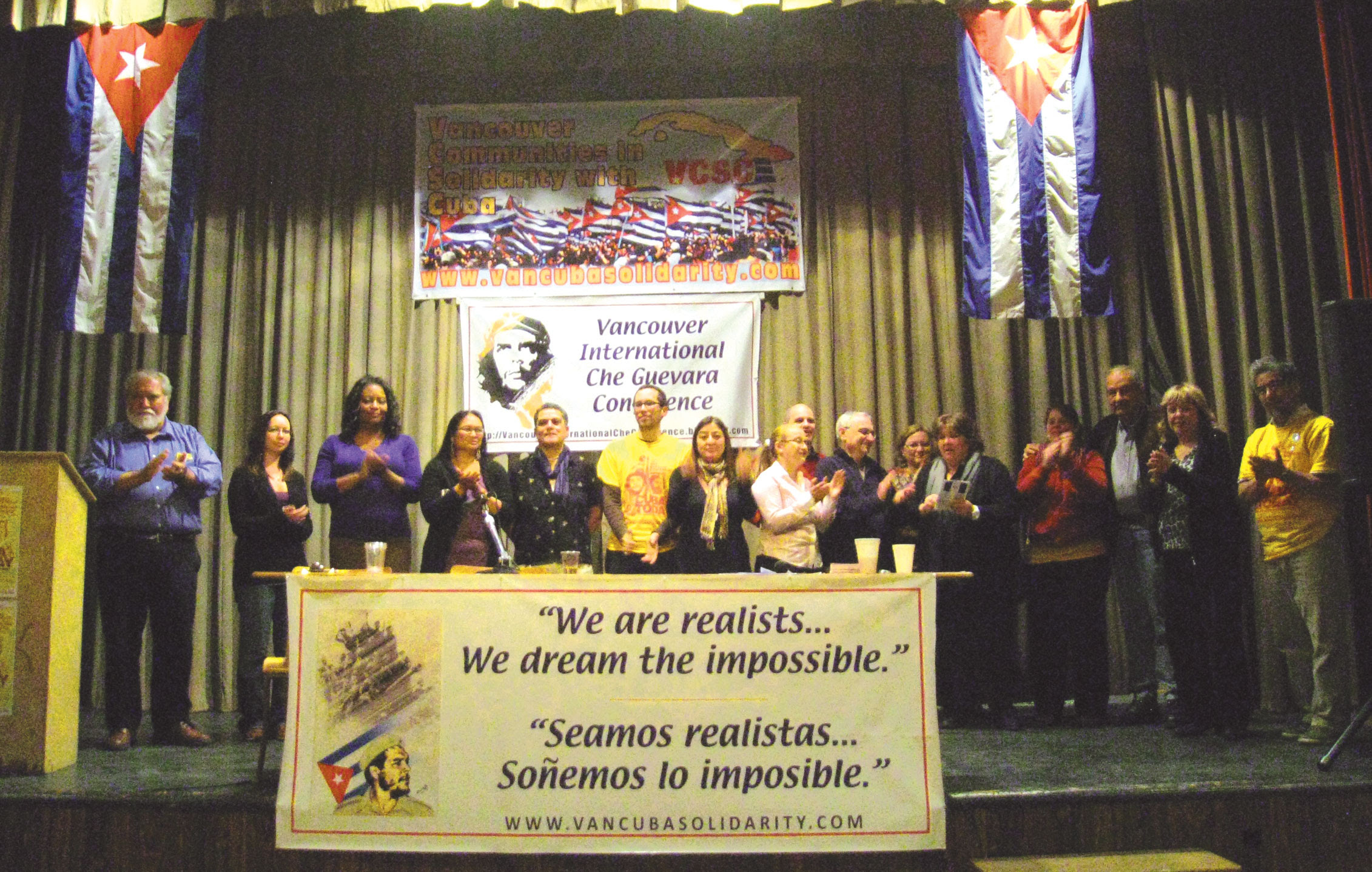